How do you pick a new puppy dog?

How do you pick a puppy dog? I dont know if there is a right way or a wrong way to choose a puppy dog. Here is how we did it: 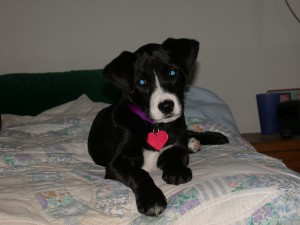 Chloe as a puppy dog

We have two dogs. Chloe is our wonderful lab mix. We got her when she was 8 weeks old. My son picked her out at a rescue in West Los Angeles. We wanted an older puppy, but they didn’t have anyone the right age/size. They had some new puppies that were born to a dog they found on the side of the freeway. They had already adopted out mommy, and were now looking for homes for the babies. My son chose Chloe. We had found this ‘temperment test’ online that you perform with the dogs. Chloe didn’t really fit what we had predetermined we wanted, but she loved our son, and that was that. He chose her! I guess it was love at first sight.

We had another dog, Chip, at the time. He was part cocker spaniel and the other part lab. Odd combination, but he was the cutest little guy. How did we choose Chip? We went to a pet store that was having a rescue adoption. He was the only puppy there – a tiny little black fur ball. He was in this huge crate, all curled up in a ball. When I picked him up he was so soft, and so sweet. Cuddled into me and just looked up at me with the most precious face. Of course we had to have him! He was hard to train, very stubborn, but super sweet and looked like a puppy forever! I went back to work full-time, and Chip was lonely at home all by himself, so we decided to get him a friend. That’s when we got Chloe.

After Chip went to doggy heaven, Chloe was very lonely. She had always had another dog to play with. She was depressed and sad, and needed a doggy friend. So we started looking around for an older puppy, one we could train, but hopefully one that already had some of the puppy stages behind him. We heard it was better to get the opposite sex dog, so that was what we looked for. I really wanted to find another lab / lab mix. Chloe was the very best puppy. Potty trained fast, never destroyed anything – even told on Chip when he was being mischievous. I had a hard time finding any puppies at all that were larger breed dogs. We have open space behind our house and coyotes frequent the area – so we wanted a bigger dog. Finally I looked in the recycler – which I had no idea even still existed – and the first dog on the list that came up was an ad for Rocco. He was the last dog left in the litter. We made an appointment go to the following day to see him. I must admit, I knew I would want him once I saw him/held him.

We drove about an hour to the house where Rocco was living with his mommy and their owners. As soon as they opened the front door out strolls Rocco. He was so cute!  His face just melted my heart. He is a fawn boxer with very little dark coloring. Supposedly the boxers with all recessive genes (which apparently he has) are not good for breeding, and not as desirable. I think they are much cuter! We didnt bother wtih the personality test, we just knew we had to have him. My husband maybe was a little more intellectual about it, but the kids and I knew we wanted him. So we took him home! He is a FUN dog. Gets into everything, goes a mile a minute – puppy stage is not over yet – and he is over 3 years old. Supposedly he will calm down soon.