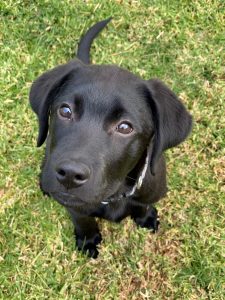 Henry is 3 months old! Wow, time has flown by!

I seriously cannot believe Henry is already 3 months old. He is growing so fast. Each day he learns a new skill, or gets better at one behavior. But then other not so great behaviors are starting to pop up, too! He has learned so many things from Elsie, our older lab. Good things and not so good things! Henry is getting bigger, too! He went for his 13 week round of shots and weighed in at 21.3 lbs. He is skinny, but tall! The vet said that he looks perfect.

Elsie is a great dog and very well-behaved for the most part. She jumps on us when we get home, though. I have never been able to get that to stop! I’ve tried every strategy. I can stand outside the gate for 10 minutes, she will sit nicely and then the moment I come in, she will get up and jump. Then go back out of the gate. She sits, I come back in, she jumps. Over and over. I have tried giving treats as long as she stays sitting, but jumping on me trumps treats! So anyway, Henry has started to jump up, too. I can get him back sitting quickly and he listens most of the time. So I hope that sticks! 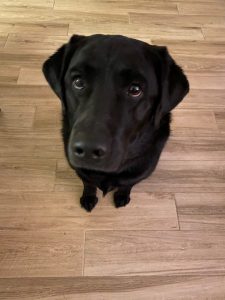 I haven’t taught anything new. We just keep practicing sit, lie down, stay and leave it. I want him to have those down before moving on. I feel like he has sit 100%, lie down is about 75%, stay is about 50% and leave it is 100% during training, but during real life – maybe 50%. I have been dropping things and telling the dogs to leave it. Elsie sometimes grabs what I drop and Henry sometimes does. Sometimes they both listen. So I obviously still have work to do. Henry is only 3 months old, so he has an excuse. Haha.

The next thing I want to teach is for them to wait at the gate, or at the door, and not just charge through. Elsie sometimes listens, but doesn’t have this 100% so she wont be a great example for Henry. We will work on it.

Henry has patches on his back of his big dog fur. The fuzzy puppy fur is going away. His big dog fur is very shiny, just like Elsie. He is going to be one gorgeous grown up dog! Just like his sister! Out in public strangers come up and comment on how gorgeous Elsie is, and how beautiful her coat is. Some of it is genetics, but some of it is diet, I believe.  I give the dogs a little bit of coconut oil in their meals, pumpkin, veggies, blueberries and some kibble. The balance is good. They love frozen blueberries! I sometimes use them for training and they get super excited!

The dogs are starting to really enjoy playing together. Since Henry is only 3 months old, and he still has a lot of growing to do, I want to make sure they dont play too rough. Elsie teases him, and wants him to come mess with her so that she can then turn around and chase him. She likes to try to slam him to the ground, which is not something I want happening, so I tend to stop the play before it gets to that point. Don’t want him to get hurt. I want him to respect her, and to understand that when she tells him to stop that he needs to stop, but I dont want him afraid of her. The funny part is that at daycare Elsie doesn’t play rough, but she does with him. We just separate them when they get too crazy. If they are playing nicely or running around together – great! Tug-o-war is lots of fun and they enjoy that.

Getting a new puppy – the waiting is so hard!