Henry had liver damage from the allergic reaction. He is FINE now.. So don’t worry. But I will tell you the whole story so you’re caught up.

The neuter ended up being successfully completed, but there was a hiccup as described in the last post. Allergic reaction which lead to liver damage! Supposedly the vet noticed a skin infection when he shaved Henry to prepare for the neuter. No big deal, he gave him a shot of antibiotics, then started to scrub him down to get the area prepped. As he was cleaning him he noticed welts and some distress.. Immediately he gave him some benadryl and other medications to stop the allergic reaction. He called me while he was waiting for everything to stabilize. The vet kind of underplayed the whole thing when he described what happened, probably not wanting me to worry too  much. So anyway, the neuter was successful.

I picked up Henry that afternoon. They had given him a personalized cone, which was cute. Henry hated the cone, as all dogs do. He was acting woozy, but didn’t seem uncomfortable. I wont repeat everything from the other post. After the first night, I took the cone off and just watched him like a hawk, and he was fine. He didn’t try to lick it or anything, so that was good! 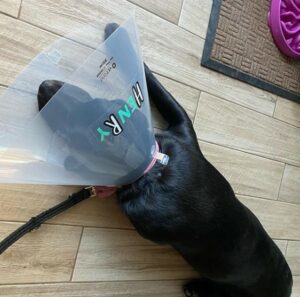 Henry was healing as expected, acting like his normal self. Eating, drinking, pooping, sleeping as normal. I was taking him outside on a leash to go potty. This morning I took him out and noticed his pee was a very dark yellow. A little alarming, but I thought that maybe he was a little dehydrated or that it was super concentrated because he held it all night. About an hour later he wanted to go out again. This time the pee was a brownish color. Yikes! I called the vets office immediately and they told me that its probably nothing to worry about, but that they would have the vet call me…

Throughout the day every time he peed it got darker and darker – to about the color of a coca cola. I was freaking out. Read tons online and all everyone said was to notify the vet immediately! So I called again and explained that I was freaking out and pretty scared, to please have the vet call me! If he was too busy, I would just take Henry into a different vet in town that had emergency service. He called back shortly after that.

The call with the vet

The vet told me that it could be a few different things, that when the body goes through an autoimmune type response to an allergic reaction, the liver can be involved. It could also be that the body is disposing of damaged muscle tissue, or blood. They needed a urine sample, and he suggested blood work, too. He said that even if it was the liver, it was not urgent for us to come in that night. Since Henry was acting normal, he wasn’t super worried, but that we should come in the next day. So that was our plan.

This is now 5 days post neuter and Henry is still acting normal. Still peeing brown, but everything else is normal. He has a great appetite, is drinking water, very playful and happy. We got to the vet and of course Henry did not want to go in. He probably remembers what happened last time! They are so sweet there, they patiently got him inside. Since COVID 19, we are not allowed inside the vets office, we do parking lot drop offs. I think he really wanted me to go in there with him.  Since it was a Saturday and they were double booked, I had to leave Henry there and they would squeeze him in as time permitted.

The vet called me about 2 hours after I dropped him off to tell me the urinalysis showed bilirubin in the urine, and that it was concentrated. So he felt like the liver probably has some damage. He will be sending the bloodwork in, but because of the Labor Day Holiday, we would not get results for a few days. Vet gave us some probiotics that help with rebuilding the liver. He assured me that he felt Henry would recover completely, because he didn’t look or act like there was a problem.

The phone call with results. Liver will be fine!

So now its the following Tuesday night, 8 days after neuter. Henry’s pee is almost normal. It had been getting a little lighter each day. So thats a relief. The vet said that he had an anaphylaxis reaction, not just a plain old allergic reaction. Yikes! His quick reaction and action saved Henry! Thank you dr!! I feel like he was in the care of the right vet, and that if we had gone to the low cost neutering place, who knows what would have happened!!

Anyway, the blood looked pretty good. There were a few things out of whack, but all could be explained by what he went through. He said to just keep him calm and healing for the next week and that he should be just fine! No long term effects were imminent. So that was good news!  We just need to be super careful what antibiotics he is given in the future!!!

So that was a scary adventure, but he is fine! Whew!