Potty Training doesn’t have to be hard!

The very first thing we worked on when we first got Henry was potty training! There are so many different views on potty training and what works, what doesn’t work, what confuses the dog, etc. So here is what we did..

We got Henry when he was 8 weeks old, and had not had any training whatsoever from the breeder. So we were starting from scratch. We picked him up at the breeders location which was close to 3 hours from our house. In the car I prepared a laundry basket with a few puppy pads in the bottom, so it would be easy to clean up if he went potty. I held him for the first 45 minutes or so of the ride and that was awesome. My husband was driving.  Henry was getting squirmy and I think he wanted to play, so I put him into the basket with a toy. He played with it for a few minutes and then passed out. He slept the entire way home!

I knew he was going to have to go potty, so the second we parked at our house I started gathering things so we could take him out of the car and what do you know.. he peed just as I was reaching in to grab him. Ok fine, not a big deal, we had the puppy pads in there. But that kind of ruined my first training opportunity. I knew that he would go immediately and I was hoping to get him onto the grass, but that obviously did not happen.

Potty training at the house

We went in the house and let him explore a bit in the little play yard we made for him. It was basically a baby playpen that we attached to the crate (more on crate training in another post), and covered the floor with puppy pads. He played for a few minute with some toys. The breeder had not fed him yet, so I gave him some food and water and let him play. As soon as he ate and drank some water, I took him outside and within 5 minutes he peed! I made a huge deal out of it! Then we played in the yard for a while. 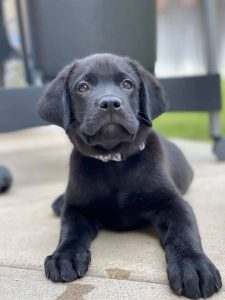 He was tired, so I put him in the crate (with door open) and he took a nap. When he woke up, I picked him up and took him right outside and he went potty immediately. I made a huge deal out of it. Then we played for a bit. We continued this schedule of either napping, eating, playing, and then going outside to go potty. I took him out every hour to 90 minutes. The cycle repeated all day up until about 9pm. I wanted to train him to go to bed and sleep for a while starting at 9pm. So I put him in the crate (with the door open) and I slept on the couch next to him. He slept until about 2am. I heard him rustling around, so I grabbed him and took him out.

He went pee and poop! Yay!! I took him back inside and put him right back in the crate. He went right back to sleep. Slept until about 6am. I took him right out and he went pee. I made a huge deal out of it!

Now it was day 2 and we followed the same schedule as the day before, and the next few days. Our schedule was:

I think the key to this is consistency and making sure you set the puppy up for success. Take him out more than you think is necessary so that he can succeed and go potty outside! Make a big deal out of every time he goes potty outside! If he has an accident, DO NOT SCOLD the puppy. If you can catch him while he is going, pick him up and have him finish going outside. Sometimes that’s not possible and they have already gotten it out. Go in and clean up the mess. Clean it with an enzyme cleaner or bleach (not on carpet, of course) so that the dog doesn’t associate that spot with the place to go potty. Don’t get upset with the puppy. Just clean it up and move on.

As you continue to take them out every hour or so during the waking hours, he will become more use to going outside to go potty. Henry was carried outside for at least the first week because I wanted to make sure he made it. And don’t delay once they wake up – if you have them wait, they will pee in the crate or on the pads. It is a long time for them to hold it and the minute the wake up they will have the sensation to pee. So grab the puppy and take them outside and let them relieve themselves. Make sure to praise the puppy every single time they go potty outside!!

Let talk about puppy pads. I used them only as a backup. I did not want to train Henry to use them. If he did, then fine, but my goal was to train him to go outside to go potty. I think that if you allow the dog to use the pads, then when is it not ok to use the pads? I think it will confuse things. Some people say that its ok to go on the pads and outside. We have a doggy door, so our dogs can go outside whenever they please, so I just feel like outside is THE spot to go potty. If you want a recommendation on which pads to buy, I like these AKC brand puppy pee pads.

I know it sounds silly, but I train my dogs to go potty on demand. This comes in very handy in life. If you are on a long drive and you stop somewhere, you dont have to walk around for 45 minutes waiting for them to want to go, just tell them to go potty and they will go. So far this has only worked with pee for me, but its worth while.  Teach the potty command simply by saying ‘Go Potty’ every time the dog is going potty. Then praise them after they go. Eventually they connect ‘Go Potty’ with actually going potty and will do it! Henry is now 6 months old and I still make a huge deal out of every single time he goes potty when I ask him to!

As your puppy starts to sleep for longer periods of time, you should adjust your schedule accordingly. Once Henry was about 3 months old he started sleeping pretty much from about 1opm until 6am, which was fantastic! He adapted well to our schedule, and after 3-4 weeks of me taking him out every hour or so, he started to go outside by himself (using the doggy door) to go potty, and then would come back in. At this point I realized that our potty training was almost complete. Henry has only had 2 accidents total (so far). One time we had the doggy door closed and didnt realize it, so that was our fault, but the other time I think he was just too busy playing and forgot to go outside.

He is now 6 months old and sleeps from 10pm-ish until about 7-7:30am. Fantastic if you ask me! We do rush out in the morning because he really needs to go out. His crate is in our room upstairs, so he needs to run down the stairs and then outside to go potty. He definitely does not stop to do anything else, he runs right out the doggy door. Our older lab, Elsie is almost 4 years old and she can hold it for a very long time!

Puppy Training – Look at Me

Protect your Dogs during Natural Disasters

One dog, two dogs, or more?