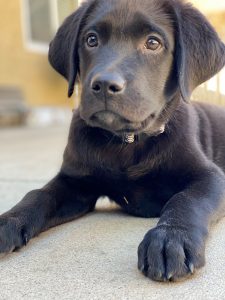 Saturday marks the end of our 3rd week with Henry. It seems like we just got him, and actually three weeks is not that long, but he has experienced a lot already.

We had a fire nearby, so we had to prepare to evacuate. The air smelled like smoke, and I couldn’t let him stay out very long to play. We are safe and never actually had to evacuate, but it was stressful none-the-less. My lack of sleep due to Henry wanting to go potty at 5am each day made handling the stress a little more difficult than normal, but we are all good.

Henry also went to the vet for his first puppy exam and 2nd set of shots. He was soooo good! We had to wait about 10 minutes for our appointment, and he just sat on my lap.  He enjoyed watching all the other doggies and kitties come in. We sat over in an area away from everyone, just in case.  His appointment went well, and he was very good. He let the vet mess with him and didn’t even notice that he got a shot. He weighed 15.9 lbs on his exact 10 week birthday. Vet said ‘He is going to be a big boy’. Also said he was healthy and very handsome! All the employees had to come over and say HI to him 🙂

We also went to visit some friends who got a puppy from the same breeder (www.oakmeadowslabs.com) and had a little playdate. Its hard finding safe places to take him. I want to socialize him, and get him use to different places, so this was a good option. The dogs all played nicely. He went into the swimming pool, which wasnt planned, but he enjoyed it.

And he experienced his first Halloween! It was no big deal. He slept through most of it. But everytime the doorbell rang Elsie barked, and woke him up. I didnt dress the dogs up this year, mainly because I was soo tired and all the fires and stuff just exhausted me more! Next year, watch out! 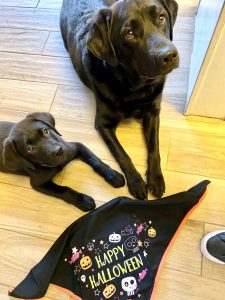 Training is going well! He has pretty much potty trained himself. Henry learned how to use the doggy door by following Elsie in and out. So now when he needs to go potty, he just goes out and takes care of business. Amazing that during this 3rd week with Henry he had ZERO potty accidents. He holds it at night in the crate, and during the day he just goes out! I close the doggy door when its dark out, but he stands by the door and whimpers so I know he needs to go out. We never let him go outside without one of us watching.

He has learned sit, and lay down, and leave it., and is doing very well with each. Lay down is the weakest skill of the 3 but we keep working on it. Leave it is super important so thats the one I am focusing on. He is in the super teething mode, and bites everything! So I am using leave it to keep him from biting us, and from biting Elsie. It also works to make him let go of clothing. So he is getting lots of tiny treats, but its worthwhile if I can get him to stop biting everyone and every thing. We have tons of toys all over, so he can chew on those!

I am really nervous about the time change this weekend.  Our 5am wake ups are going to become 4am wake ups! I am not sure how I will adjust that. I put him to bed an hour later yesterday, but he still got up at 5am. I left him in the crate until 5:30, and he chewed on some toys, but his crying was getting louder, so I knew he had to go potty. I dont want him to have an accident! I’ll try it again tonight and see what happens.

He is a good boy!

He really is a good boy and smart. He catches on to things quickly. Like every other lab, he is food motivated so training is easy. I just need to make sure to be consistent with him.  We love him so much and he is a great addition to our family! This 3rd week was very busy, but probably nothing compared to what will come.