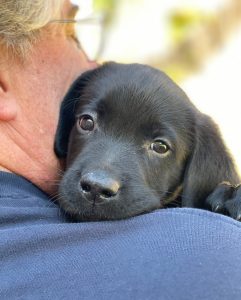 Well, we got our new English lab puppy. He is the cutest little guy ever! We got him on October 12, 2019. He was 8 weeks and 1 day old. When the breeder handed him to me, he cuddled into me and put his head on my shoulder. He gave me little sweet kisses. My heart melted that very moment. I held him for about 10 minutes and then passed him to my husband. This photo was taken when we got home, when our sweet new lab puppy putting his head on his shoulder. We are both smitten with our new baby!

Long Drive to pick up the puppy

The breeder lives in a remote area, and it was quite a drive. She is about 3 hours from our house. We got up bright and early to get there, and we had our sweet puppy in our arms about 9am. The road to her ranch is very narrow and windy and I was afraid he would get car sick, so I held him. To be honest, I would have held him anyway. So for the hour or so drive down the curvy hill, I held my cute little guy. He was giving me kisses and seemed to enjoy being held. Once we got to the bottom of the hill he started making little whining noises so I thought maybe he had to go potty. We brought a laundry basket and put a puppy pad in the bottom. So I put him in the basket. He didn’t go potty, but he did curl up in the corner of the basket and go to sleep.

He slept for over an hour. When he woke up he played with the little toy that I brought for him and was very content in the basket, so I let him stay in there. He did not go potty the entire trip home. We did stop and pick up lunch at a fast food restaurant near our house. When we parked, that is when he peed. Which was good, actually, because it was easy for me to clean it up. I brought a huge thing of wipes, a bunch of towels, and plenty of potty pads.

You may be wondering what we named him. It was funny because we had a name chosen for him, but when I first saw him, I knew the name didn’t fit. We had chosen Milo. We didn’t think he looked like a Milo.. So we decided to wait until a name came to us. During the 1 hour drive down the hill, he kept looking up at me with this sweet face and the name Henry came to me. He looks like a Henry. My husband said he liked that name just fine, and Henry himself liked it – his ears perked up when I said it to him. Maybe because he thought it sounded like I was asking him if he was hungry? LOL Anyway, thats his name.

This photo was taken the day we brought him home. Its so great having a new lab puppy in the family.