Henry is already 6 months old. This time has sure flown by. He wasn’t a tiny little puppy for very long. He has grown up so fast. He is HUGE! He is taller than Elsie. He has super long legs!

I feel a little ripped off that I didn’t have a cuddly little puppy for very long, maybe a month. He grew so fast. But he is still super sweet and likes to cuddle up with me on the couch. All he really wants to do is cuddle up with Elsie, though. She is NOT into it. She likes him just fine, but she is not a cuddly dog. She doesn’t cuddle with us either.

Elsie is super sweet, she will come over and give kisses, want to be petted, will lay by our feet, but no actual cuddles. Well, once in a while we may get a cuddle, but once she realizes she is cuddled up with us she will move. Same thing with Henry. Sometimes she is so tired and comfy that she allows him to lie next to her. Sometimes she will let him actually lean on her, or lay on her leg. It is very rare, though. Usually she gets up and goes to lay somewhere else. Its sad, because its all Henry wants! 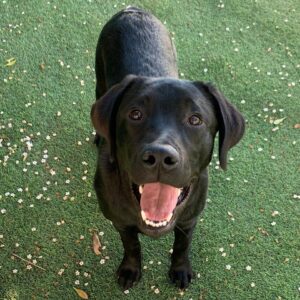 They play so much together! They chase each other around the yard and up the hill, they play tug-o-war with various toys, including with this Kong ball that we have. It cracks me up because its very hard to get a grip on, and is not a typical tug-o-war toy. But they like it.

So Henry is probably 50 lbs now. His legs are super long! He is very skinny. I feed him so much food, but he just burns it off because he wont sit still. He wants to play constantly! He likes to play catch with the tennis balls, which is fun. He gets distracted in the middle of us playing though, and will run up the hill, or see another toy which looks more appealing at the moment. Probably typical behavior for a 6 months old puppy.

He is good on sit, look at me, and lay down. He will do them pretty much 100% of the time when asked. He is about 50/50 with stay. He is great with ‘leave it’, and ‘trade me’. We are working on stay still, wait and drop it. He is very smart and learns quickly. He wants to please us, and wants the treats so he has been pretty easy to train so far. I feel like he is pretty obedient for a 6 months old puppy. If I walk him alone he walks very nicely, right next to me. If I take both dogs at once, all bets are off. I actually feel like its not safe to take them both, so I have been taking them individually. They both pull so hard when they are together, and wrap around each others leashes.. its not fun!

Cold Dog – do you cover your dogs up?