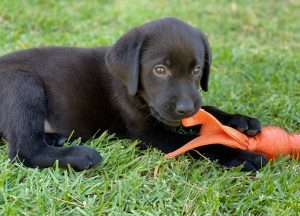 We picked up Henry on October 12th and he was 8 weeks and 1 day old. We arrived home with him around lunch time, so we had a full day to help him get acclimated. His first few hours with us was fun and smooth as can be!

The thing that was weighing on me was our older lab, Elsie. She is about 3 1/2 years old. She is very socialized and loves dogs of all kinds. Elsie is not aggressive, and really just goes with the flow most of the time, BUT.. huge BUT.. another dog has never been in our house. How will she react? Will she be jealous?

How did Elsie react?

Initially Elsie seemed excited to see Henry. She came right over to him and started 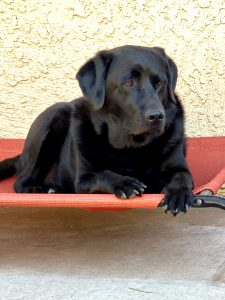 to smell him and let him smell her. But after a couple minutes she was bored of him. He wasn’t doing anything, he was probably still in shock because his whole world has changed and he was plopped in this new backyard, with new people, and a new dog (who looks a lot like his mom!). Anyway, Elsie went to lie on the dog bed that we have outside and he happily romped on over to her. She got a little nervous, got up and went into the house. This is the elevated dog bed that BOTH dogs love! Coolaroo

Henry was dejected. I grabbed him and gave him some loves and took him out on the grass. He has never been on the grass before and he loved it. He laid down and just took in the sights and smells. Elsie came back out, smelled him, and watched him. She kept her distance for the most part when he was up walking around. But she was not mean to him at all. She was just observing.

It was so funny watching Henry walk on the grass, he was all wobbly like a drunk man. He was walking a little sideways, trying to stay balanced. He had not eaten before our 3 hour drive to the house, so I knew he was hungry. I had his food soaking in some water to soften it up for him. We have a little playpen thing set up outside the crate, so he has his own little ‘area’. I put his bowl and some water for him in the playpen area and gave him the food. Wow! He scarfed it down!  I have a slow feed bowl that I will use moving forward. I dont want him to choke! Here is the slow feeder bowl we use.

We had a couple visitors who wanted to come see Henry, and he was so sweet to each of them. He loves to be held and gave everyone plenty of kisses and cuddles. Henry didn’t seem nervous at all. We took him outside a ton and he did go potty outside, and he enjoyed wandering from person to person to be picked up. Elsie was still pretty much avoiding him, but seemed curious at the same time. I try to introduce my puppies to lots of people, and take them out to experience things in the world. I am a little more nervous with Henry because he has only had one set of shots so far, and there are so many dog diseases out there in the ‘outside’ world.

We also walked down to the neighbors house so she could meet Henry and give him some cuddles and love. Henry was so sweet, he just sat on her lap and enjoyed the attention. He definitely has a loving personality, and seems to be social and friendly.

About 3 in the afternoon, I sat on the couch with him, and he feel asleep next to me. He slept for about 2 hours. He woke up and was raring to go. We played outside for a while. Elsie has a plastic pool. We put about 3 inches of water in it, because it was warm out and Elsie enjoys splashing in the water. Henry was watching her and I think he really wanted to play. I let him try. He ended up getting his front 2 feet in the water and looked so impressed with himself. Then he backed out of the pool and ran around in the grass. He went pee 5-6 times in the first few hours at the house. Maybe he doesn’t enjoy the feeling of a full bladder.

Anyway, so far so good. Its only been the first few hours, but I think he is going to love it in our family and I KNOW we will love  him!

Halloween and your dogs