Our dog has Oral Papilloma!

Henry (our younger lab) has an Oral Papilloma wart! 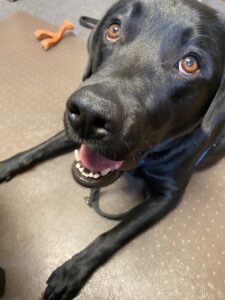 Poor Henry has an oral papilloma wart. You can see it in the photo. It looks like a tooth, but its actually a hard white wart on his tongue. I will say, it doesn’t seem to bother him at all. So that’s good. However we found out that is very contagious!

I made an appointment and took him to the vet yesterday, because we were concerned. For such a common thing (according to the vet it is very common among young dogs), I was shocked at how little information is really out there. If you know what it is, and type in ‘oral papilloma’ you can read tons about it, but if you don’t know what it is…

I tried searching for ‘white bump on tongue’, ‘dog bump on tongue’, and things like that and the results came up with so many things! Most sounded pretty daunting, to be honest. Hurry and get your dog to the vet, its very dangerous to have a bump on your dogs tongue!!! Thus my immediate rush to get him to the vet.

Let me tell you what our vet said, and hopefully if this is what your dog has, you can rest a little easier. Now, of course there is no guarantee what your dog is the same as what Henry has – so definitely take your dog to your vet – but if it looks the same, it could be the Oral Papilloma virus in action.

So our vet basically said its a virus that is very contagious among young dogs. It is spread through drinking the same water, licking each other, licking the same things, etc. So if a dog goes to dog parks, doggy daycare, boarding, etc. they can catch it pretty easily! There are probably tons of dogs with it right this moment, and the owners have no idea! He said most of the warts are found on the gums, and most dog owners dont really check their dogs gums/jaws/back of the mouth very often. So dogs have it, and no one knows.. so they pass it to other dogs.

Dogs can have one oral papilloma wart, or many! It varies greatly. He said Henry had the one on his tongue, and also one on his gum in the back of his mouth, that looks like it is going away.  There are no real good treatments for this. He said antibiotics, anti-virals really dont work. He said they are expensive and the results are not great, so he did not suggest we go that route.

You can surgically remove them, but you are not getting rid of the virus. If a dog has a ton of them and it is hampering their quality of life, he said then it may warrant more action, but he felt like we should just let it run its course. Henry is otherwise just fine. Eating normally, drinking normally, and playing normally. So we agreed to just quarantine the dogs and wait it out.

Elsie does not have any. She is 6 now, though, so the vet thought she was probably already exposed (and may have had some when she was young that we never caught). Once dogs have this virus, they usually dont get it again. So anyway, we are going to keep the dogs home so we dont infect any other pups.

The vet assured me that this virus, even though there is a papilloma virus in humans, doesnt transmit to humans or other domesticated pets.  So don’t worry about that. But wash your hands if your dog kisses you, so that you dont accidentally infect another dog.

Our veterinarian also was saying that there is talk of a vaccine, but that vaccine will sometimes cause cancer at the injection site, so he would not really recommend that either. To be honest, Henry is just fine. It is not bothering him in the least, so we are not going to pursue any treatment.