Henry sure likes to chew. Have you ever felt or looked like a pincushion? I do! He especially loves to bite on my right arm and hand. I am not sure whats different between my right arm and my left, but he definitely prefers the right arm. He is so cute, its hard to get mad at him, but it HURTS! He has some very sharp little puppy teeth. The little stinker is almost 13 weeks old, and still has all his puppy teeth. I give him chew toys or try to play tug of war with him to distract him. Sometimes it works.

Henry is adorable and super smart. He is learning so many things! I do short little training sessions 2-3 times a day and he has sit, lie down, stay (about 50/50) and leave it down! If I drop anything on the floor and stay leave it, he leaves it! Elsie will still go after it sometimes, but not Henry. LOL This weekend I am going to work on ‘wait’ by the door, and maybe ‘go to your bed’.  For food, he will do anything!!! If I could only get him to leave Elsie alone, then I’d be thrilled.. 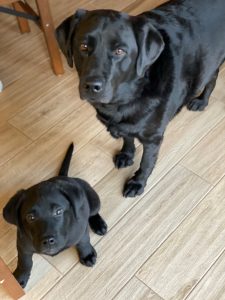 I have taken him on a few car rides. I am not going to say he likes it, but I dont think he dislikes it. Last night I took him and Elsie to get dinner. He pretty much was plastered against Elsie the whole time. He whined a bit, but after 5 minutes or so he relaxed. I think because it was dark he was not as comfortable. This was his first night-time outing. I want him to get use to going in the car, so I am going to just start taking him everywhere I can.

He has an appointment on Saturday to get his 3rd round of puppy shots. I dont think they will give rabies at the same time, but hopefully they will. Then we will be free to go for walks soon. I want to start training him before he gets too big! I think I will start walking him on the leash in the yard and just reward him like crazy when he walks nicely. Every time I put the leash on now he just wants to chew it. I will spray it with Bitter Apple or soak it in vinegar, maybe that will reduce the urge to chew it. Elsie is still a bit of a puller on the leash. She doesn’t pull the whole time, but she does pull. I hope I can train him not to pull! He is going to be a big boy!

I give Elsie veggies with her dinner. She was a little overweight and I was told to cut back on her food. So I added veggies to give her bulk so she didn’t feel hungry. She LOVES them! I give a variety of broccoli, carrots, peas, blueberries, apples and pumpkin. Not all of those things at once, but 2-3 at a time mixed in with the dry food. I have been giving Henry the same thing. He devours it! I think he would eat mud if I gave it to him. He eats fast, even with the slow feeder bowl. Hopefully he will relax and realize that he can take his time.

Puppies are fun, but a ton of work! I am exhausted 🙂