It was a rough day! I dropped him off bright and early with our favorite vet. They were going to do the surgery later that morning. About 1pm the vet called and told me that when he shaved Henry to prepare him for the surgery he noticed a skin infection in the area. He said it was not close to where he was going to be cutting, so he gave him a dose of IV antibiodics.  No big deal, right? Well, shortly after Henry had a bunch of hives and swelling. He was having an allergic reaction. It was either to the drug they used for anesthesia, the antibiodic or the stuff they used to clean him!

Allergic reactions are nothing to take lightly. The vet immediately gave him Benadryl via the IV and everything calmed down. So after things were under control, he continued and finished the neuter. He said everything went as expected and that he didn’t think the allergic reaction would have any long lasting effects.

I picked up Henry that afternoon and he was so happy to see me. He was still under anesthesia, I could tell. Henry was acting a little drunk. He laid down and kind of zoned out on the way home. Cone was on and he just couldn’t get comfortable, and moved around a bit, banging the cone into the back of my seat. But he was not crying or acting like he was in any pain.

We got home and he was just walking around, very slowly, in circles around the kitchen table. Whining and walking and could not settle down. I took him outside a few times so he could go potty. He just kept looking at me as if he was asking me to help him. I just kept being calm, and loving on him. Henry slowly got up on the couch and laid next to me for a little while, but then just couldn’t settle down. He wanted to walk in circles and whine. 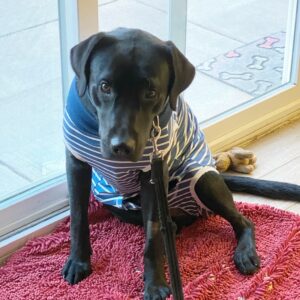 I finally gave him his dinner, and put him in the crate (in the family room). I sat next to him and coaxed him to sleep. He only slept about 15 minutes and then was whining again. I left him in the darkened crate in hopes that he would fall asleep. I stayed right next to him, but the anesthesia drunkeness needed to be slept off. The cone just was not comfortable for him. I had a blow up cone from Elsie. She never liked it, but I decided to try it on Henry. The moment I put it on him and immediately he was a bit happier. Went outside again, then back in the crate. He finally fell asleep about 10pm and slept all the way until about 7am.

Morning after the neutering

Morning was much better. He was pretty much acting normal, and had no idea he was neutered! Henry was super happy, and no longer whining at all. He wanted to go outside, so I put the leash on and we went out for a bit. Breakfast was gobbled up, and then Henry settled in on the couch next to me and slept some more. He never really seemed to notice anything happened to him. No licking of the area or anything that entire day. Late afternoon, I took off the cone. He was so happy! Immediately he curled up into his spot on the couch and slept for a few hours.

I had purchased some jammies for him to wear, that block the neuter area. I decided to see how he does with those on, instead of the cone. He was not thrilled to have them on, but didn’t seem to care after a few minutes. He was still so happy not to have the cone on, and just went with it. If your dog is getting neutered, maybe buy him some jammies!

Doesn’t he look cute in his jammies!?

Double-dose of Rimadyl is helping Rocco

We met our puppy