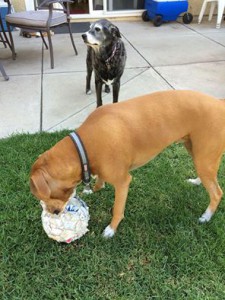 Rocco wants to play soccer! I think he needs a new ball.

Rocco update: Rocco is feeling much better! He wants to play soccer. This is the first time he has attempted to play with one of his soccer balls since his surgery. His jaw is sore so he couldn’t really pick it up, but he tried! He cant open his mouth wide enough. I will keep encouraging him to, though, because I think he needs to work that jaw muscle. He has a cloth, stuffed ball. Maybe we can play with that until his jaw feels better. He is a ball kind of guy. He will play with other toys, but his first choice is always a ball of some sort.

Chloe never liked balls. She would chase a tennis ball now and then, but would much rather have a stuffed animal. She liked to play chase, and liked rope toys, but never really balls. She treats her toys so nicely. She never ruins anything. She will carry the stuffed animals around, lay with them, just ‘play with them’, but not destroy them. Rocco destroys them! He wants to rip them to shreds. When he was a puppy we use to call him Shredder!  Oh, Chloe would try to remove every toy’s eyes, though. She would chew them off. But that was the only thing she would destroy.

Our old dog, Chip, loved tennis balls. They were his favorite thing (besides shoes).  I would buy the huge box of balls at Costco, and always have new ones available for him. His face would fill with joy as soon as he saw a new tennis ball. He also loved his bed. He would drag it around. He was a lab/cocker spaniel mix. And he was a very cute dog – looked like a little puppy his whole life!