Squirrel? Rocco almost got him! 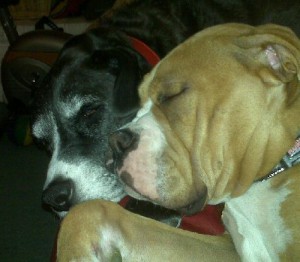 Rocco update: he is doing great! Almost caught a squirrel this morning! No news on the tumor yet. His jaw is still sore, but they said that might take a while before he feels better. He is a happy pup and almost back to his normal spunky self. Just the fact that he saw the squirrel, actually wanted to chase the squirrel, is a great thing! I am glad he didn’t catch it.

I was talking to someone on a dog website that I posted some questions on. I met someone whose dog had a similar issue. We were discussing the whole process and how our dogs healed and how we handled it. It was an interesting discussion. Her dog wore the cone without issue after his surgery. She made a little play pen sort of area for him and he stayed in that, wearing his cone for the recouperation period. So she was able to go to work and do normal things, but she said she felt very guilty leaving him alone. I was telling her that I felt guilty putting the cone on Rocco, so I made sure he was never alone.  Looking back, I think my solution was better for Rocco – he had someone there to comfort him at any given moment.  Not judging this other person at all! Just sayin’

Her dog didn’t have any complications afterwards (jaw, or anything) and has healed great and is now fine. So I am very happy for her. She found out pretty quick what type of cancer her dog had. They are going to do radiation with him. We are still waiting to find out what kind of tumor it was, and what treatment they will recommend. As a former cancer patient myself, I am very hesitant to put him through all that. But if they give me compelling evidence that it will help him – then by all means I will do it.