My sweet boy is not doing so well

I am sad. Rocco is not well, he seems to be declining. His sight in his good eye is failing. He can still see, but not very well. When he tries to concentrate on something his eye doesn’t seem to want to cooperate. When I take him for walks he crashes into stuff, and when we play bubbles he can hardly even see them. He goes after the ones on the grass, because they are not moving. 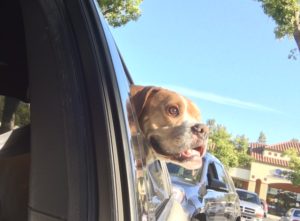 He is eating fine, he can get around fine, he seems to be going potty and all those sorts of things fine. I just see him struggling with his sight now, and is afraid to do things. Even on our walks, he just doesn’t seem as happy go lucky as he has always been. Every noise freaks him out, its just so sad! Everything he loves has been taken away. He cant play with the soccer balls, or any toys really. He cant even enjoy the walks anymore. He just lies around. I have to go to work each day so he just lays there on the couch. He doesnt run up and down the hill chasing squirrels, checking out the yard, he just doesn’t have interest in it anymore (probably because he cant see!).Well, It is heart-breaking. This is all happening too fast! I get one thing sort of under control, and then a new problem arises. I just wish there was something I could do to slow it all down a bit.

I’ve been taking him for rides. He still loves to go in the car. I took him to In-N-Out the other night, and of course got him a cheeseburger. He loved both! I have been feeding him lots of good stuff (maybe not good for him, but he loves it). Wet food so he gets some doggy nutrition, then I give him boiled chicken covered in turkey gravy, or fast food burgers, tapioca pudding, all sorts of soft stuff like that.

Every once in a while he goes over to the toys and acts like he wants to play! He has this one squishy yellow ball that has been one of his favorites for a long time. We played kick ball with it the other night. He had fun! It was a little spurt of energy and ‘Rocco’ was back for a few minutes.

The vet said that once his sight starts to go in the good eye, that means that the tumor is either working its way up into the brain or over to the other optic nerve.  We all felt like this was going to be months away, but its all happening so fast!

I don’t think he is suffering. as in pain, but he is suffering in that he cant play, he cant go on walks (well, he can, but its not so fun). He can however, sit on my lap & get lots of love. Im afraid the end is near, but  how will I know when to allow it to happen? The rest of his body is very healthy – its just this stupid cancer that’s the problem.

Holding off on Prednisone