The cancer is back! 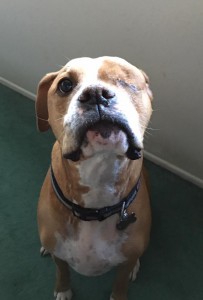 The tumor has returned. Poor little Rocco. He is such a good boy, and I love him so much. I cant believe the tumor grew back so quickly! I hate cancer! Here is what has happened in the past few days.

Over the past several months, Rocco jaw has been sore. It seemed to have never healed from the surgery. He has been taking Rimadyl for it, and I think it takes the edge off. The last month or so, however, he has been more uncomfortable. He no longer plays with his soccer balls (well, he tries, but when he opens his mouth wide, it hurts). So he would rather not. It hurts when he yawns big, or gets excited and goes to grab a big toy. Its so sad, he whimpers and looks at me to ‘fix it’. Oh how I wish I could.

We finally decided to take him back in, it seems like its getting worse and I feared that the tumor had returned. My husband thought it was tooth related. So anyway, I made an appointment to go see the surgeon who did the tumor removal. I was going to go to his normal vet, but they missed the cancer in the first place, and I didnt really want to have to explain everything that the surgeon did – I decided I would go right to the person who actually knew what all had happened. So anyway, finally got an appt for today.

We went this morning. The surgeon is really nice, and completely remembers Rocco. He told me that it felt like there was a mass there. His eye socket was hard and it should not be. So he said we could do a catscan or a ultrasound. Ultrasounds are much cheaper and he felt like he could see enough with the ultrasound to see what all was going on. He said it could be an infection/abscess, cyst or a tumor. He wanted to do a biopsy on the tumor (if it was one), but I told him not to. We are not going to do another surgery. The last one only kept the cancer away for a few months. Not putting Rocco (or us) through that again!

So I went to work and they kept Rocco there. About 2 hours later he called me with the bad news. It was definitely a tumor. He said he could see the edges and he said it looked like the old tumor, and it was a crunchy tumor (whatever the heck that means), and thats why he remembered it. There is a little good news, the tumor is on the tmj or near it. The tumor is not near any organs, not in the nasal cavity, not near the other eye or going towards the brain. (he still does have some of the original tumor up in the brain area – that has not grown). So even though the jaw area is painful, its not deadly to have the tumor there, as long as it doesn’t continue to grow so quickly. If we can keep it from growing, then Rocco will have some discomfort, but we can control it with pain meds and anti inflammatorys. He wants me to talk to the oncologist tomorrow to see if they recommend steroids, or anything else to help keep the tumor from growing.

So that’s where we stand. Right now we are doing nothing. Rocco will just go on as he was before. The tumor hopefully will stop growing and he can live a long time. If it continues to grow at the same pace, he wont have many more months. Once it gets to the brain, things go quick.  I have everyone praying for him! Many people love Rocco. Will you please pray for him, too??

Rocco’s tumor is back.

Double-dose of Rimadyl is helping Rocco