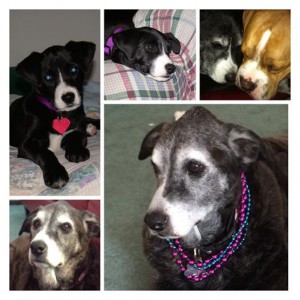 Last night (which was our wedding anniversary) we had to say goodbye to our sweet, gentle, beautiful Chloe. She was almost 14, she had a long happy life. She declined quickly from OK to definitely NOT OK. The last 6 months or so I could tell she wasn’t feeling 100%, she lost interest in eating, she had a hard time getting up, it looked like her back legs arthritis was getting worse. But she never complained. She was such a sweetheart. We will never know for sure what happened, but her symptoms matched kidney failure. Chloe was the best dog ever and will be deeply missed.

Some of my favorite memories of Chloe: When we went to get her at the rescue organization she was part of a litter of 10 pups. Her mom was found on the side of the freeway pregnant. She gave birth to the pups at the rescue. We went to the rescue to see another dog, an older puppy. But we ended up looking at the ‘new’ pups. This was going to be Nick’s dog, so we let him pick one. All the dogs were in a pen. Chloe was the one who was most interested in us, climbed over all her siblings to get over to us so we could pet her. Of course Nick wanted HER! So we told the lady we wanted her. Had to go downstairs and fill out papers and talk to the main lady. She said that there were already over 20 people interested in the pups, and that she didnt want to add anymore people to the list. We asked if we could please be on the list, just in case. Then she said she couldnt add us because her computer wasnt working. Stu piped up – “Whats wrong with your computer? I can fix it!”. And he did 🙂 Then she said “You can have the puppy. Which one do you want?”,, So that was how we got Chloe.

She was a great puppy. Potty trained quickly (we crate trained her and I think that worked wonders). We had the crate in Nicks room. I found out later that he would sneak her out of the crate and let her sleep on his bed. One night she chewed on the footboard of the bed. Nick yelled at her. She stopped and never did it again. Thats the kind of dog she was. If she got in trouble for something, she would NEVER do it again. She wanted to please, and she did! We had Chip at the time, who was not a pleaser – he was a brat. Haha. He got into things and just didnt care if you yelled at him. Chloe would tell on him. If he was trying to get in the trash, she would run up and get me.

Chloe loved our cat Ashley. She would give her huge kisses, wanted to cuddle with her, wanted to be with her always! Ashley would hide and Chloe would just wait for her to come back down. I dont think Ashley liked all the attention but she allowed it. And sometimes she would come down and mess with Chloe, so she must have enjoyed the puppy love a little.

Chloe had these eyes that just melted your soul. She was so in tune with us, and just the best dog. She automatically knew when you needed cuddles, and would be there! She listened, she always wanted us all to be happy. She was a great big sister to Rocco. She potty trained him, showed him how to use the doggy door, tried to stop him from doing things he wasnt suppose to – or would come tell on him so I could stop him. He absolutely loved her! She tolerated him 🙂

Chloe is now in doggy heaven and I think of her often. She was and always will be my sweet girl, Chloe.