Rocco’s eye is completely healed, I think he really feels fine! There doesnt seem to be any discomfort, except he has some itching. I think its internal itching. He rubs his eye against the couch, or the edge of the bed. I rub it for him, too. Not too much else we can do, but other than that once in a while he is doing great! He is back to his old self, but seems to be more attached to me now. He has always been MY dog, but now he is even moreso. Maybe because of his ordeal, not sure.

He has been having a great time playing outside, chasing squirrels, playing soccer, going for walks, whatever! Life is good in Rocco land. 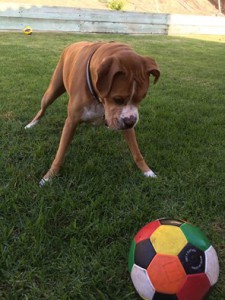 Look what I found Mom!

A friend of mine gave us a few new balls and he has been in heaven.  Then I went to a garage sale and found this very colorful ball for 50 cents. I had it in a bag in the living room (room he doesn’t go into normally). I was vacuuming and he came in to see what I was doing. I forgot about the ball. I had just given him one from my friend so I was saving it until that one died. Anyway, I heard this happy little squeal type noise and looked over and he had the new colorful ball. He was so excited, he grabbed it and took it outside. I went out with him and got this adorable picture of him!

Unfortunately that ball didnt last long. It was a very thin leatherette style cover and it ripped off pretty quick – but he did fully enjoy it for a day or so!  I look for soccer balls whenever I see garage sales – he loves the soft / almost flat balls the best.