Happy Birthday Rocco. We had his party on Saturday and it was a great success. We did not invite any dogs, all the guests were the humans he loves most! My husband and I, our kids and their significant others and my mom. It was the perfect group. Rocco was so happy! 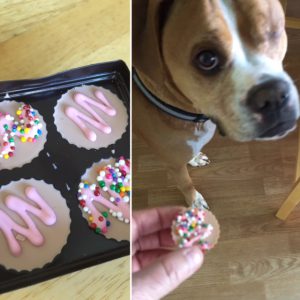 Before the party I went running around trying to find doggie ice cream. I thought for sure that Petsmart would have it – NO. Target – NO. Finally found it at Albertsons. But while at Petsmart I found these little peanut butter cup looking treats. Grabbed a box for Rocco. When I got home I gave him one. He was a little unsure what to do with it. He was droooling! He knew he wanted to eat it. LOL So anyway, took him a minute but he figured it out. He loved it!

The party was fun. We all really did whatever Rocco wanted to do. My daughter and her boyfriend brought bubbles for him. He is afraid of toys now, and I completely forgot about how much he loves bubbles. He was in heaven. They played for a long time! Rocco came in and was exhausted. We had a bbq and of course Rocco got his very own burger. He scarfed it down! I gave him his normal dinner first because I knew he wouldn’t want to eat THAT after having a yummy burger.

For dessert he got to have some doggie ice cream. It was so cute, he ate it very carefully and deliberately. Didnt want to miss a drop! My daughter put a candle on for him. 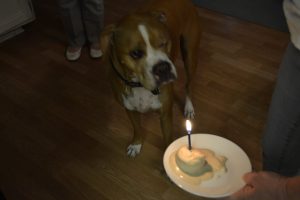 We obviously didn’t make him blow it out. But it made for a cute photo.  I got him two boxes of the little ice cream cups. Frozen Paws I think it was called. Its easy for him to eat and something cold might make his jaw feel better.

After all that we put on the animal channel so he could watch some tv. We watched My Cat from Hell. It kept his attention for a little, but then he fell asleep! He had a very full day. Full of fun and love from all his favorite people. I think he had a great birthday party!

I hope that we can celebrate with him again next year!! Miracles happen all the time 🙂