Chloe, our 11 year old lab was sick the other day. It gave us a bit of a scare. She was vomiting every 20 minutes. It was so sad to watch. Nothing I could do to comfort her. After about an hour of it I called the vet. They said I should bring her in. Since she has some health issues, and is an older dog, we were a little scared. 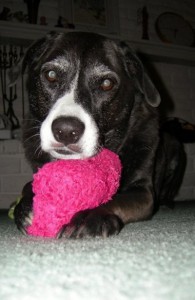 This is sweet Chloe cuddling with her purse

Chloe takes Rimadyl for her arthritis. I was told I should give her half a tablet daily to ‘maintain’ her comfort and for the most part that works. On days when she seems to be having trouble walking I was told I could give her an additional half tablet. Prior to the vomiting spell, I had given her the extra tablet. I thought that maybe it upset her stomach. When I told the vet that I had given the extra pill, she was even more concerned. She said that it could be toxic to her. Yikes!

So my daughter and I headed off to the vet. Chloe was excited to go for a ride. We went right after she had a vomiting spell, so I knew we had 20 minutes to get to the vet.  She normally loves the car, but she wasnt feeling well and just laid on the back seat. She whimpered a bit, which was so sad. We made it in time.

After a long wait we saw the dr. It was about 1am. She gave Chloe an exam and said that her heart and lungs are great, no masses, no blood in her stool, everything seemed normal. They wanted to take some blood to rule out other things. They gave her some fluids, an anti-nausea shot, an antacid and took her blood. The shot seemed to work, she did not vomit at all after that.

We were told to watch her carefully for the first 24 hours, withhold food and water until morning. Then feed a bland diet. I arranged to stay home with her all day the next day. Fed her small bland meals, and she started feeling better.

Results from the labwork came back normal. So that was great news! So maybe it was just something she ate, or a complication from her megaesophagus. Its now 2 days later and she was doing really well today. Appetite is back, she is moving around fine, acting normal 🙂 Crisis diverted.. Yay!

I love Chloe so much. She is the sweetest dog ever!  So glad she is ok!

Second opinion – hold off on Prednisone