Rawhide is Evil and so is Crisco! 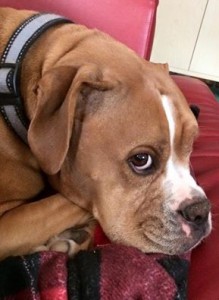 Yesterday was the 4th anniversary of Rocco’s ‘eat a few sticks of Crisco’ adventure – what did he do to celebrate? Swallowed a big hunk of rawhide! (I never gave him one before, and the chunk was pretty big so I didn’t think he would swallow it!). It’s been about 10 hours and he seems fine. Hoping it doesn’t get lodged in is stomach or intestines. Wish I could stay home to watch him.

I called the vet and they said dogs swallow it all the time. About 25% of the time it causes problems. They said to watch and make sure he continues to poop. As long as things are ‘moving along’ then he is probably fine. If he vomits, or gets bad diarrhea, then also thats bad. She said we could bring him in, but she said unless there are signs of a problem, he will probably be fine. The stomach acids hopefully will break it down/soften it up enough so that it passes.

I will sleep lightly tonight, and be listening for problems. Rocco seems absolutely fine. He is conked out. Lets hope it stays that way!

Well, back on December 9, 2011 he somehow (still dont know how) got into a brand new 3 pack of Crisco sticks. I had them on top of the microwave because I was going to make some cake frosting. Anyway, I came home from work and Chloe came running up to me to tell me something – I can tell when she is trying to get me to go see something – so I followed her. Out in the family room was a crisco wrapper. Then she took me outside, and found another.. And there was Rocco – going potty. Whitish diarrhea! He had vomited up some of it, I could see little white piles. Yikes – he ate the Crisco. I found the third one, not completely eaten. Oh no! Immediately I called the vet and they said bring him in NOW!

Off we went to the vet. We did not have to wait at all, thank goodness because I was pretty worried. Vet did some blood work and determined that he needed to stay over night. The plan was to flush his system, much of it had already been digested – so they would monitor him overnight, do more blood work, and flush him out to hopefully keep his system from absorbing all the fat. They were concerned about many possible things – including Pancreatitis. Mass amounts of fat is very dangerous to dogs and sometimes it doesn’t ‘pass through’ but instead gets absorbed. So we left him there and worried all night. By the afternoon of the next day they said they flushed it all out and that his bloodwork was normal. They didn’t think he would have any ill effects from it. Whew!!! Quite a huge vet bill, but our baby was going to be ok! Rocco stayed OK even afterwards. No pancreatitis or any other issues. Rocco likes to live life to the fullest!

The cancer is back!