Took Rocco to the vet today. Just for a evaluation / recheck sort of thing. He said the tumor is obviously growing, and its going to be more and more uncomfortable as time goes on. He thinks that some of the muscles/nerves on the side of his face are affected and that’s why his jaw hurts so much.

Neurologically he felt like Rocco is doing great, so he doesn’t think that portion of the tumor that they left in there has grown up further into the brain. He said he was not showing any of the typical issues of meningiomas in the brain, so that was good news! He said he was alert, could concentrate, was looking to him for cues, was walking normal, and acting as he should. He told me to watch for seizures – because once they start there are medications he can have to keep them from getting too bad.  I hope that happens way in the future, if it does advance to that point.

He was a little concerned because Rocco has lost over 8 lbs in 2 months. So he is not eating enough. He told me to feed him more often, and give him anything he likes. I know it hurts sometimes when he eats, so thats why he doesn’t just gobble everything down like he use to. I have been feeding soft foods. I have eliminated dry food, dog treats, cookies (kills me because he loves the pumpkin cookies), and pretty much just giving him soft cheese, tiny pieces of chicken, wet food, cottage cheese, dog ice cream, goats milk… I need to find more options for him. 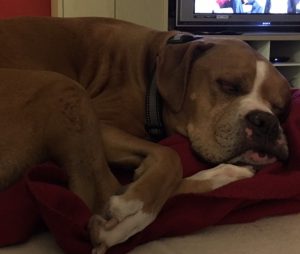 I have Rocco back on Rimadyl, which I think does help him feel better. We took him off of it for about a week because he was acting strange. But the vet said its better to keep him on it, and even give him pain pills – if we keep the pain away, and keep a constant flow of the meds – he will feel better overall. Makes sense. I haven’t been great about making sure he has the pain pills. In fact, I have only given him the Tramadol once. He said I should give it to him regularly and that will help him be more comfortable. He says his jaw/cheek probably aches constantly, but there is no way for him to tell us. He cries if he yawns, or opens his mouth wide, so that pain is obviously worse. So I am going to keep him on the Rimadyl and the Tramadol and see if he feels better.

He has had some mild tremors lately, too. The vet said there are many reasons dogs have tremors, but usually its because they are in pain. So that points again to giving him the pain pills. He said I can grind them up and put them in food. Its getting harder and harder to get him to eat the pills. I cant just throw them down his throat because I am afraid I will hurt him.

My poor little guy. I feel so bad! He is such a good boy, I just want him to feel better!!!

I’m a little worried. Tumor or Rimadyl side effect?

My sweet boy is not doing so well