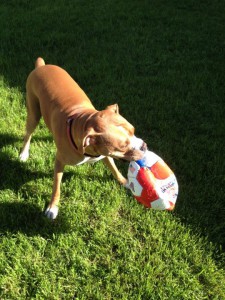 (Wednesday am). Poor Rocco – his jaw is super sore. He barked and it hurt, he yawns and it hurts, and when Lindsey gave him a cookie yesterday he couldn’t eat it and was yelping in pain. He loves his cookies so I am sure this was very disturbing for him! Called the surgeon and he said it could be from the surgery (they did work very close to his upper jaw), but they want to see him. He also has very dark blackish poops, they said he needs to be seen for that, too! So I took today off. Not sure how long all this is going to take, or if there will be any special care needed. I gave him soft food for breakfast and he gobbled it down, and now he is sound asleep right next to me. Cant this cutie pie catch a break? I feel so bad for him. I know its normal to take two steps forward and one step back after surgery, but I just want him to feel good again! I want him to be able to play soccer outside again, I want him to be his wild and crazy self again! This picture is from before the surgery.

Later the same day:  Everything is fine! Dr not concerned about the poop, they tested it and it’s just the meds. No blood!! The jaw pain is probably because the ‘mass’ was right above his jaw, so that muscle is probably sore from the surgery. Soft foods for a while. They said to keep him on all the medications for a few more days to help him get past the soreness. Rocco, aka Captain fawn beard, is exhausted from his day out. I think he is tired of going all the way to the valley for the vet visits. He would probably enjoy a long walk around the neighborhood a little more. He loves the car and I dont want him to think every time he goes in the car he will be going to the animal hospital. He really is in good spirits and other than the pain in the jaw seems fine! Thanks to all of you for the ideas and well wishes. We all appreciate your concern.

Second opinion – hold off on Prednisone