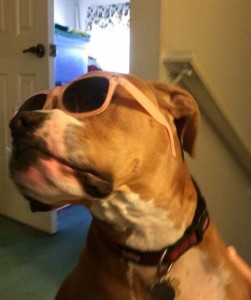 Boxer Rocco and his cool shades

I watched this adorable video on Youtube last night, which pretty much sums up what it is like to own a boxer. Here is a link to the video – you should definitely watch it

Why Would you Choose a Boxer?

Boxers are puppies forever. Rocco is 4 years old and still acts like a pup. Boxers are fun! Boxers have incredible personalities. They are adorable, sweet, cuddly and up for anything!

If you watched the video I linked above, you will see how goofy they are, how different from just about any other breed they are, and how much fun boxers bring to the household.

Rocco is so excited when someone comes home. Chloe is, too, but she calms down right away. Rocco goes nuts for about 10 minutes. He wants to play. He will bark and encourage you to go into the yard and play some soccer with him. If you don’t he will bring toys to you, or sit there and stare at you until you give in and throw something for him.

He loves to play rough, but doesn’t really have anyone to roughhouse with. My husband will play with him sometimes, but only for a minute or two. Poeple get hurt. Rocco doesn’t mean to hurt anyone, he just gets carried away. As soon as you say ‘ouch’ he will stop immediately and look at you with the most adorable apologetic face.. Then kisses it is!

He chases anything that moves in the yard. A leaf, a lizard, a bird, squirrel… anything! He loves to chase bubbles. He concentrates on them and tries to catch every single one before it hits the lawn.

He talks a lot! He is very verbal. I wish we had one of the collars from the movie UP, so I could tell what he is saying. He says a lot. Boxers are verbal dogs. Its not just barking, but actual talking. I am trying to teach him to say MOM. He has said it several times, but not when I am asking him to, so I think its just a coincidence. Thats ok, I’ll take it! I love my boxer pup.

Getting a new puppy – the waiting is so hard!

We met our puppy