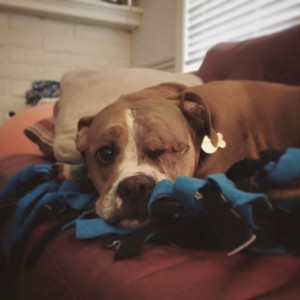 His eye looks a little better

Our morning has been a lazy one! I am taking Pirate Fawn Beard (oh yeah, Dad and I changed his name) to the vet in a little while for a check up of sorts, and I will post an update once we get back.  I am exhausted, but I see progress and its wonderful that Rocco is healing, swelling is going down, and hopefully soon our life will be back to normal.

Later the same day: Rocco is doing really well. He doesn’t seem to be in pain (although he is still on pain meds). He is getting a little more rambunctious. The surgeon said he is coming along just as expected, and is healing quickly! We go back in Sunday to remove the stitches. I think the hard part is over – at least I hope so!! Thank you to Lindsey for puppy sitting while I work. This way he (captain fawnbeard) doesn’t have to wear the dreaded cone. He hasn’t really tried to scratch his eye area, or rub it on anything yet. The surgeon said we have to be really careful if we dont have the cone on him because he said its going to start being very itchy and he will probably scratch it. Until we have the stitches out, that could be BAD news!  We do have the inflatable cone that we can put on if he starts acting like its itchy or if he starts trying to scratch it / rub against things. We are suppose to still ice him a couple times a day to keep swelling down. Rocco doesnt seem to mind it, maybe it feels good.